Twitter has announced that it will display new labels on the accounts of state-affiliated media entities, providing more transparency around the information shared by what are essentially Government-moderated accounts. The ‘government account’ label will be added to the accounts of key government officials, including foreign ministers, institutional entities, ambassadors, official spokespeople, and key diplomatic leaders.

Why this matters: Social Media Today explains, given that the majority of people now get at least some of their news coverage from social media, this should help improve digital media literacy – or at the least make users aware, for example, that the providers they’re getting news from are state-controlled. This move maps back to Twitter’s ongoing efforts to increase transparency ahead of the US Presidential Election, and solidify its position compared to other social media platforms. 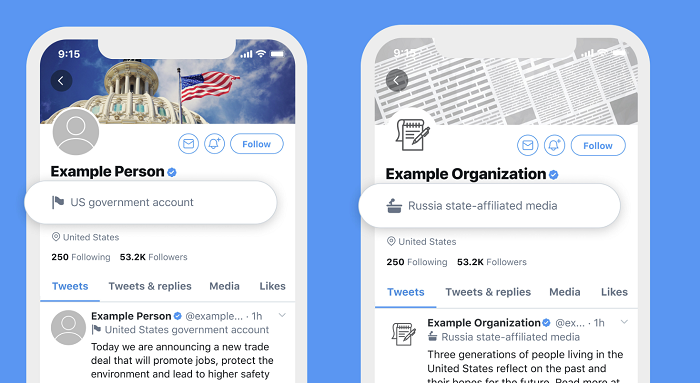 Instagram Reels launches globally in over 50 countries, including US

We’ve all seen it by now… Instagram’s Tik Tok clone, titled Reels, has launched in over 50 countries around the world. Reels is just another step in Facebook’s history of cloning successful rivals (looking at you stories). It’s hard to tell if the new format will be successful, but considering how successful stories has become, Reels does have a chance to compete with Tik Tok, especially if the app is banned from the US. At least Tik Tok can have a little fun with the launch.?

Why this matters: As many clients are already on Instagram, Reels may provide an easier to digest opportunity to get into short-form video content. Content developed for Reels can also be transitioned to Tik Tok, meaning content can be used on both platforms and can help save some creative budget.

Microsoft Confirms It Is Still Looking to Buy TikTok

Microsoft may be getting into the social media market, at least in the US, as it is in talks with ByteDance, the parent company of Tik Tok over purchasing it’s US operations. Last night, the Trump administration signed an executive order giving Tik Tok 45 days to be sold or be banned from the US due to ByteDance’s ties to the Chinese government. While talks are still early, Microsoft CEO Satya Nadella said any acquisition discussions will be completed by Sept 15th. CNBC reports that The acquisition could cost Microsoft up to $30 billion dollars to buy the short-form video app that has exploded in popularity in the last two years.

Why this matters: While a ban in the US may seem like it won’t have an effect on Canada, we can expect there to be a shift as a large number of users and creators are based in the US. There is no reason to panic yet, but it’s something to keep an eye on as clients start to dip their toes into Tik Tok.

How the pandemic may affect holiday shopping

While the holidays are traditionally a heavy online-shopping season, this year, we expect those numbers to grow, with 75% of U.S. shoppers who plan to shop this season said they will shop online more for the holidays than they did in previous seasons, according to Google research.

Why this matters: Since online and in-store traffic is sure to fluctuate, retailers should ensure digital strategies remain agile to meet customers where and when they feel comfortable. To stand out this year, retailers must use a digital-first mindset to give people the information they need. Here are a few ideas – more information can be found in their 2020 Retail Guide.

DoorDash is launching the first of its line of online convenience stores as the delivery company continues to cater to an increase in demand during the COVID-19 pandemic. These new stores are “owned, operated, and curated” by DoorDash, giving customers the opportunity to order household items, spices, and other corner store essentials to you in 30 minutes.

Why this matters: This is another example of how the pandemic has shifted consumers’ purchasing behaviours, giving new players the opportunity to disrupt business across various sectors including the restaurant and retail industry.

Verizon Will Stream NBA Games in VR Through League Partnership

Have you been itching to go to a basketball game? Verizon is aiming to help scratch that itch by allowing you to attend the NBA restart games in virtual reality. Verizon-owned production company Ryot is facilitating the broadcast, which is streaming through Yahoo Sports’ NBA League Pass. This is one of the new ways the NBA is testing out new media formats as the technology landscape changes, so if you have an Oculus VR headset you can get a front-row seat to the NBA restart without leaving your house.